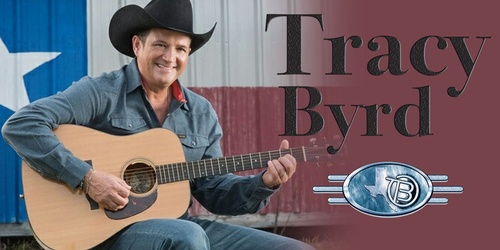 Tracy Byrd became a household name on the Country Music scene in 1993 when his third single, called “Holdin’ Heaven”, off his MCA Records, self-titled debut album, hit #1 on the Billboard Country Charts. Join us as the Tracy Byrd 2020 North American Tour comes to the RP Funding Center on February 13th at 7:30 PM. Byrd's second project, "No Ordinary Man", kept building on the momentum the first album created, the first radio single from it called "Lifestyle's of the Not so Rich and Famous" reached #4, followed by another top five hit, "The First Step", then with the release of the smash, chart topping hit "Watermelon Crawl" the album crossed the half million sales mark and certified Gold. The song "The Keeper of the Star's" shot to #1 on the singles charts and pushed the album to Double Platinum Status, which certifies sales of over 2 Million Copies and won Academy of Country Music's "Song of the Year" award in 1995. His third studio Album, "Love Lesson" is one of Tracy's favorites included the title track, and top five hit single for Byrd, also included top 15 singles, "Walking to Jerusalem" and "Heaven in My Woman's Eyes", Byrd's personal favorite. "Big Love" became Byrd's fourth studio album with it's release in the fall of 1996. It spawned two more top five singles with the release of the title track and "Don't Take Her She's All I've Got". The Album "Big Love" became Tracy's Fourth consecutive Studio Album to be Certified Gold. MCA Records released "Keepers: Greatest Hit's" containing all the hit's from Byrd's catalog of songs. The album quickly earned another Gold Record award for Byrd The release of his Album "10 Rounds" spawned the party song of the year, "10 Rounds with Jose Cuervo" which shot to the top of the Billboard Charts to notch Byrd's third #1 single. In 2005, he released his second greatest hits project, which debuted in the top five of the album charts and became Byrd's sixth Gold Album, and sent him to over 6 Million Records Sold!!! Opening for Tracy will be special guest the Eli Mosley. Ever since he saw Tracy Byrd on stage at six years old, he knew he would be a country music artist. The Lakeland, FL native has released two albums the self-titled Eli and Come Along With Me and is releasing singles which will be part of his upcoming third album. Tickets go on sale Friday, August 30th at 9:30 am. Ticket prices are $62, $44.50, $33.50 (other fees may apply) and are available by visiting the RP Funding Center Box Office, toll-free 888-397-0100, and online at www.rpfundingcenter.com. All date and ticket prices are subject to change without notice.